How to Prevent Water Pipe Burst: The Ultimate Guide 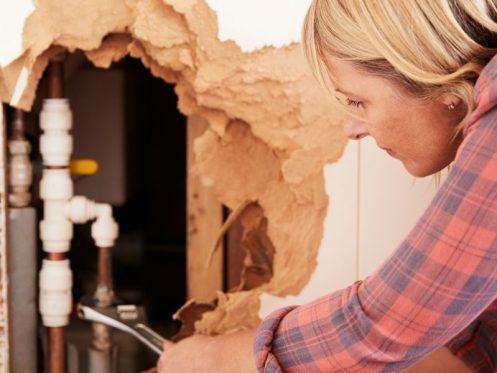 A burst pipe can send torrents of water cascading onto floors and into crawlspaces and basements. The damage from even one burst pipe can cost thousands of dollars.

You can prevent the many causes of burst water pipes by using your pipes with care and scheduling regular maintenance for your plumbing system. Works Plumbing ranks as the best provider of professional plumbing repair services in San Francisco. We are happy to help our customers with emergency plumbing service, but we want everyone in our community to know how to prevent a water pipe burst.

Burst pipes can threaten your safety, ruin personal possessions, and cause pervasive damage to the structure of your home. Burst pipes can cause damage in one of three ways.

The most direct damage from a burst pipe is from the water pouring out of it and any toxins or infectious agents it might carry inside.

If homeowners do not remove the source of moisture and kill the mold quickly, it could spread. Once mold can establish colonies on waterlogged wood or soaked carpets, they release spores that can travel through the ductwork and take root in other places in your house, adding to the cost of mold remediation services.

As water from a burst pipe seeps into floorboards, cabinetry, and other wooden items, the wood can warp. Over time the structure of the wood breaks down, and the wood loses its ability to bear weight. Water can cause floorboards to pull away from the subflooring, doors to stick, and beams to lose their load-bearing capability.

Damage to the Electrical System

Water and electricity form a dangerous combination. If a burst pipe occurs over an electrical outlet, electrical appliance, or electrical wires, the water might carry an electrical charge from a hot wire. The electric shock could cause burns and even death from electrocution.

If you store belongings like old photographs, notebooks, drawings, and other valuable or irreplaceable items in cardboard boxes, they might sustain damage when a pipe bursts.

Damage to the Home Foundation

Water from a burst pipe can also damage the foundation of a home. It can erode concrete. If the volume of water is large enough, over time, the foundation could lose its ability to support the house, causing catastrophic instability.

The severity of water damage from burst pipes means that every responsible homeowner should know how to prevent a water pipe burst and watch for signs of damage.

Causes of Burst Pipes and How To Prevent Them

Pipes burst when they are not strong enough to withstand the water pressure. Several factors can increase a pipe’s risk of bursting under pressure.

Some pipes made from older materials, like cast iron, might not be as strong as they were decades ago. If older pipes become clogged and water pressure builds up, they could fail.

The best way to prevent older pipes from bursting is to replace old piping with newer corrosion-resistant materials. That approach costs more upfront than dealing with aging pipes individually as they fail. However, replacing old pipes reduces your risk of a sudden pipe failure.

Manufacturers build pipes to contain air and water, not ice. If they freeze, water will expand within them as it turns to ice. The outward pressure from the ice can cause the pipe to burst.

You can prevent your pipes from freezing by winterizing your plumbing before the weather turns cold.

During cold snaps, running a trickle of water through the pipes prevents cold water from stagnating long enough to freeze.

Metal pipes, including cast iron, galvanized steel, and copper, are susceptible to rust as they age. Harsh drain cleaners can also corrode pipes, weakening them and causing them to break.

Using gentle cleaners like baking soda and vinegar instead of commercial drain cleaners makes an ideal way to prevent corrosion. If you have older pipes that corrode due to rust, you might need to replace the rusted length of the line.

Tree roots can invade pipes that lead to the outside, blocking water flow. As water builds up behind the tangle of tree roots, it can cause the pipe to burst.

If tree roots have already infiltrated your pipes, a plumber could try to blast dirt off the roots with a jet of water to minimize the clog. In some cases, your plumber might need to physically dig the roots out with excavation equipment.

Preventative maintenance is essential for avoiding tree root intrusions. Plan your landscaping so that all trees and shrubs sit a safe distance away. Consider installing barriers to prevent roots from reaching the pipes.

If water runs at high speed through a pipe and a valve shuts off the water flow suddenly, the water can slam into the valve and against the pipe with the force of a hammer. Water hammer can weaken pipes and seals or cause pipes to burst.

If you hear clanging or banging sounds from your pipes, talk to an expert plumber who knows how to prevent water pipe burst due to water hammer.

How To Deal With Burst Pipes When They Happen

When a pipe bursts, you might not know where the damage occurs. Understanding how to prevent a water pipe burst from becoming a catastrophe requires you and your plumber to work quickly to:

One of the first things to do if you have a leak from a pipe is to stem the flow of water through that pipe by shutting the water off at the source and running faucets to divert water away from the burst pipe.

In most cases, the first priority in dealing with a burst pipe lies in stopping the flow of water and either repairing or replacing the broken stretch of pipe. If a pipe is under pressure and in danger of bursting, turning on faucets that draw from the same line reduces water pressure and can prevent a burst.

Homeowners do not always have enough information to diagnose a burst pipe or recognize every warning sign. A professional plumber will have more tools available to test for moisture, inspect pipes for flaws, identify weak spots in pipes, and so on. However, the following tips should help homeowners to be more proactive.

Pipes should last for decades, even centuries. By following the steps in this guide, you should be able to protect your pipes. When you see your plumber, it will be for routine inspections and servicing instead of waiting for an emergency plumber to patch your burst pipes.

Works Plumbing is a dedicated team of plumbing experts based in Pacifica, CA. We’re familiar with many plumbing problems, from plumbing issues in old homes with older materials to fixing installation problems in newly constructed pipes. We also handle emergency plumbing and routine plumbing maintenance.

If you experience a burst pipe in San Francisco, call Works Plumbing at (650) 414-7261 for prompt emergency service. Call us also if you have older pipes or worn pipes that need preventative maintenance or upgrades. We know how to prevent a water pipe burst so you can use your plumbing with confidence.